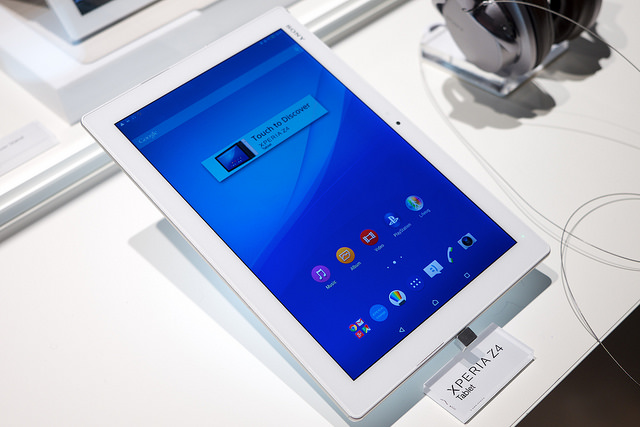 After being teased twice in the past week and a half, Sony announced the reveal of their Xperia Z4 Tablet at the Mobile World Conference this year.

Not willing to sit back and watch Apple and Samsung to dominate the tablet market, the Xperia Z4 features a 10.1 in IPS display with a 2560 x 1600, 300ppi resolution. Sony promises the tablet will provide the “best viewing experience you will hold in your hand.”

Pegged as the replacement to the Sony VIAO laptop series, the Xperia comes equipped with a Snapdrgaon 810 processor, being just 6.1mm thick; matching the iPad Air’s thickness and weighing just 389 grams for the base model and 393 grams for the LTE model. It’s waterproof, runs Android Lollipop, has 3GB of RAM, 32GB expandable memory, has a USB port, and an improved battery that reportedly gives “17 hours video playback.”

Now that Sony is no longer producing the VIAO laptop line, the Xperia Z4 comes with a Bluetooth keyboard and Microsoft Office’s Productivity Suite. Possibly a step in the right direction for the longevity of Microsoft Office software.

“We will not compromise on stamina at all,” says Sony when talking about the Xperia’s power. It has the same 6,000mAh battery as its predecessor, only this time Sony claims it’s more powerful, lasting for 17 hours of video playback. That’s in spite of raising the display resolution to 2,560 x 1,600 and moving up to the new Snapdragon 810 processor. More powerful, a longer-lasting battery and somehow even thinner than it’s predecessor, Sony’s devices continue to be wonders of design and engineering.

For all of the accomplishments surrounding the Xperia Z4, Sony is well aware that their primary goal is to convince users that an Android tablet provides more value over their competitor, the Apple iPad. Not an easy task to accomplish, so it’ll be interesting to see how this situation plays out.

The Xperia Z4 Tablet is set for a global release in June of 2015. It will come with 32GBs of onboard storage, expandable via a microSD card, and will be offered in both LTE and Wi-Fi-only variants. Price points are currently not available yet.

We want to welcome you to our site and thank you for stopping by! iQ2 Communications is a communications company based out of Toronto, ON, with an international reach (spanning from coast to coast in Canada, as well as the US). In a nutshell, we like to think of ourselves as a one stop shop where you can find a solution for any communication related service or device that you’re currently using. END_OF_DOCUMENT_TOKEN_TO_BE_REPLACED

Vidotron dropped the gauntlet, hinting with its Wireless for Less web portal that it could be preparing to waltz into Canada’s largest markets, which include Ontario, British Columbia, and Alberta. If we take a closer look, it becomes more and more evident that Vidotron might have what it takes to take on The Big Three. It couldn’t be more true that Canadian’s are tired of having the same companies with a vice-grip over telecom, especially with their power over their small companies with mildly different plans and branding.